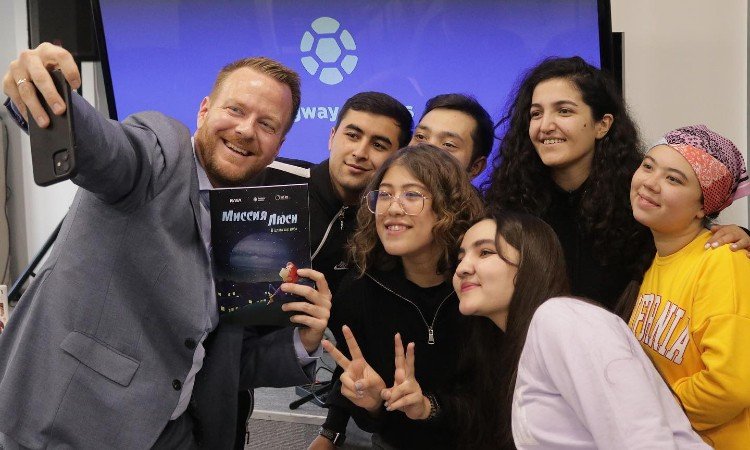 The U.S. Diplomatic Mission to Tajikistan congratulates a four-member team from Tajikistan’s Oogway Comics for recognition by the U.S. National Aeronautics and Space Administration (NASA) as a semi-finalist in its global Space Apps Challenge 2021.

The NASA Space Apps Challenge is the world’s largest hackathon, which includes more than 5,000 teams from over 160 countries and territories. During the 2021 contest held October 2-3, teams competed to produce innovative solutions to a range of scientific problems. American Space Dushanbe facilitated participation of 24 Tajik teams this year, after hosting the first NASA Space Apps Challenge in Tajikistan in 2020.

NASA selected the Oogway team as one of only 37 semi-finalist teams. The 10 winning teams will be announced in December.  Winners will earn a tour of the United States and attend a rocket launch.

“The NASA Space Apps challenge was a tremendous opportunity for Tajik participants to demonstrate their talents, promote science education, and work with NASA,” said Timur Sharipov, founder of the Oogway team.

American Space Dushanbe Director Nilufar Muradova, leader of the NASA Space Apps Challenge in Tajikistan, noted “We are thrilled that a Tajik team has become a semi-finalist for the first time. The Oogway comics team is also the only team representing CIS countries this year! This is a truly unique event for the country and the region.”

U.S. Ambassador to Tajikistan John Mark Pommersheim congratulated the Oogway team and all Tajik participants, stating “The NASA Space Apps Challenge demonstrates the U.S. commitment to promote scientific collaboration with global partners. We are proud that Tajikistan has proven that its young innovators can innovate at the highest level. Congratulations to Team Tajikistan!”

The Oogway team held a public presentation of its Mission Lucy comics series at American Space Dushanbe on November 20, 2021.

Tajik participation in the NASA Space Apps Challenge at American Space Dushanbe was made possible by funding from the U.S. Embassy in Dushanbe.

Тhe situation on the Tajik-Kyrgyz border has escalated again