More than 13 thousand hectares lands in Kanibadam city territory are going to be irrigated by the Great Fergana Canal.

About this was announced during the ceremony of 80th anniversary of the construction of the Great Ferghana Canal. The meeting was held on the territory of the “Ravot” recreation area of ​​the rural jamoat Pulodon of Kanibadam town.

According to the press center of the city administration, the construction of the Great Ferghana Canals was started in 1939. In the Sughd region territory, the canal was built using the hashar method for 45 days. Today, irrigation of irrigated lands of most dekhkan farms is carried out from this hydraulic structure. Totally, there are 24 thousand hectares of irrigated land on the territory of Kanibadam, of which 13 thousand are supplied with water from the Ferghana Canal.

According to the free encyclopedia, the Big Ferghana Canal is a large irrigation canal in Uzbekistan, Kyrgyzstan and Tajikistan. Built in 1939-1940, was one of the largest hydraulic structures in the USSR. The total length of the canal is 350 km, of which 56 km passes through the territory of Kanibadam and irrigates the land of 60 jamoats of the town. 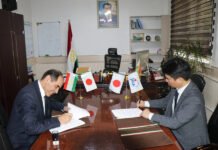